The cost of being in the top, or when Zipf's law breaks

Many things in the world have a Zipfian distribution. Xavier Gabaix recently attempted to explain how this pattern may emerge for the case of cities. Lada Adamic covered how Zipf's law goes online. The literature is vast because any field has its own examples.

But Zipf's law is a market-type pattern: the outcome of many agents making decisions independently. When you have a planner, it may break. 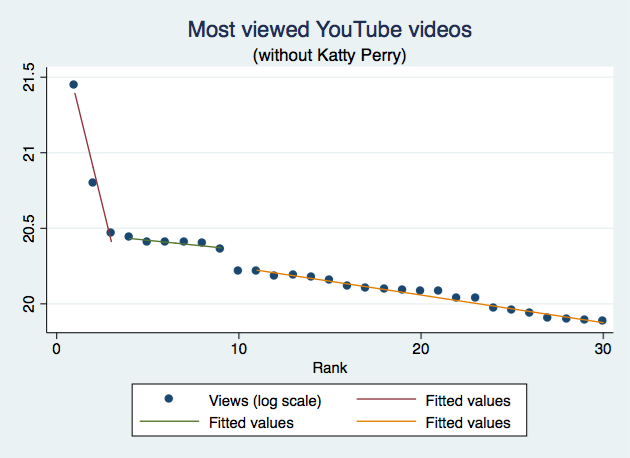 Zipf's law implies that here you must see a nice linear relations along the ranks. Instead, you see three lines: top 3 (I), top 10 (II), and 30 songs (III). The slopes of the lines are different in an interesting way.

Line II and III have the same slope and discontinuity between 10 and 11. (Actually, the discontinuity is between 9 and 10, but the 10th song is Katy Perry's 2013 release, while songs around it are older. Kind of an outlier.)

This discontinuity is the bonus for being in Top 10. If any magazine or website mentions YouTube most viewed videos, it's usually something like top 3 or 10 or somethings like that. Other songs don't get much attention, even if they're equally good.

But there's another effect: the bonus for taking the first place. This is what Line I and Line II are about. Psy goes through the roof of Zipf's law just as Bieber did before him.

So, why it's about planning? Well, without the media, there would be no tops. And tops are coordinating devices that say what we should watch, listen, and do first of all.