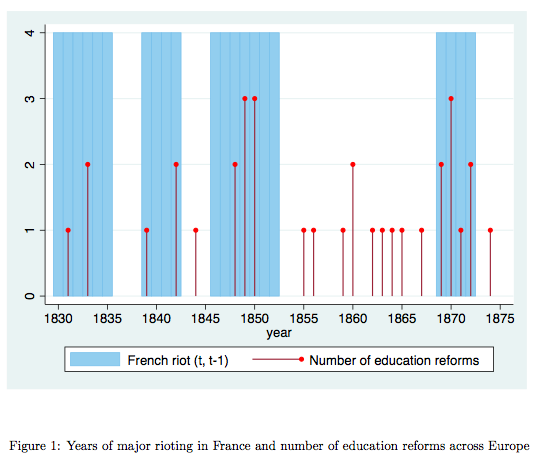 Back in the 90s, growth economists explained income differences among countries with human capital (Mankiw, Romer, and Weil, “A Contribution to the Empirics of Economic Growth”). Formal education was a typical proxy, with either fraction of educated population or years of education entering regressions.

The human capital story had to integrate the institutional component since then, but formal education remained correlated with national output. One channel or another, nations have to have good education to develop.

Universal formal education came from governments in the 19th century. Peoples actually thought it was a bad idea. They cared more about what is now called social security, unemployment, and inequality.

"Universal," however, typically meant "compulsory." The reason is suggested in the first graph (taken from Alesina and Reich, "Nation Building"). Each time the French rioted, European rulers reformed education in their territories. The education system helped keeping children busy with the "right" thoughts and reduced the risk of insurrections. It didn't help European monarchs for long, but the habit remained. Say, "education" is still the most popular issue in the US Congress bills.

While many are concerned, no one started asking children what they would like to learn. Sparse surveys (like the one by NYC or Gates Foundation) ask typical satisfaction questions—the ones that ensure you don't protest much in the classroom. Authors don't question the curriculum. Questions about biased history classes would be outer space, but no survey even asks "Do you want to learn biology?"

So, education is really sacred, unlike any other services on the market. You are supposed to spend ten plus years on being good at things you don't care about. It's like a 20-year mortgage, but here they also take your time.

Any hope? If 100 years ago the factory-like training in the school produced suitable workforce for real factories, now employers expect more flexibility from hires. Mainstream technology becomes skill-biased and requires from employees to be "quick learners." Employers in competitive industries have to respond. And maybe this new demand for quick learning will change the education system more than democracy did in the 20th century.
Posted by Anton at 4:10 AM