Transition to Market in China

In my previous post, I described the agency problem of the Soviet political elite reforming planned economies of the newly formed independent states. The following graph compared the post-1991 transitory period in Russia and a few Eastern European countries, former members of the Eastern Bloc: 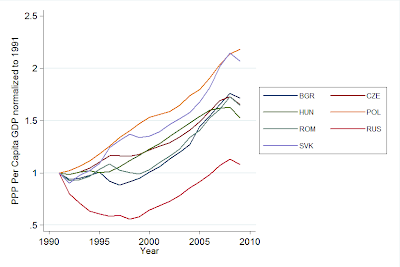 The Russian privatization program kept public property away from producers. It redistributed ownership through vouchers, which were securities granting the right to privatized property. After they got these securities from the state, people sold them significantly lower their potential price. Vouchers happened to end in the hands of a few. Much of other public property had been privatized without any vouchers. For instance, through fraudulent shares-for-the-loan auctions organized by the Russian government in 1995.

Such was the essence of market reforms in Russia. Meanwhile, China had their own market reforms started one and a half decades earlier. And the Chinese elite did an interesting thing. No, the central government didn't act like a benevolent dictator who gives away his power by transferring property to producers. Instead, it allowed independent producers to appear by themselves. First in agriculture, then in industrial production.

The rationale behind liberalization of the economy was the following one. If the government cannot encourage politically stable growth rates, let the market support it, where possible. The government neither competed nor shared property with the private sector. The market delivered additional value, which would otherwise turn out to be a deadweight loss of a centrally planned economy.

The Party not only preserved all of its property, but also gained indirect control over the private sector, which had been intensively growing over the last three decades. Naturally, it emerged as much more powerful interest group than it was under a pure planned economy. And it did so without country's output falling to 1/2 of its pre-reform level.

That shows how various coalitions within elites lead to different policy decisions and economic outcomes. In a critical moment, the Soviet hierarchy was unable to make forward-looking decisions and balance the interest of intra-elite factions. In contrast, the Chinese counterparts came out of the similar situation as winners, through with a very powerful competitor growing next to them.
Posted by Anton at 9:25 PM